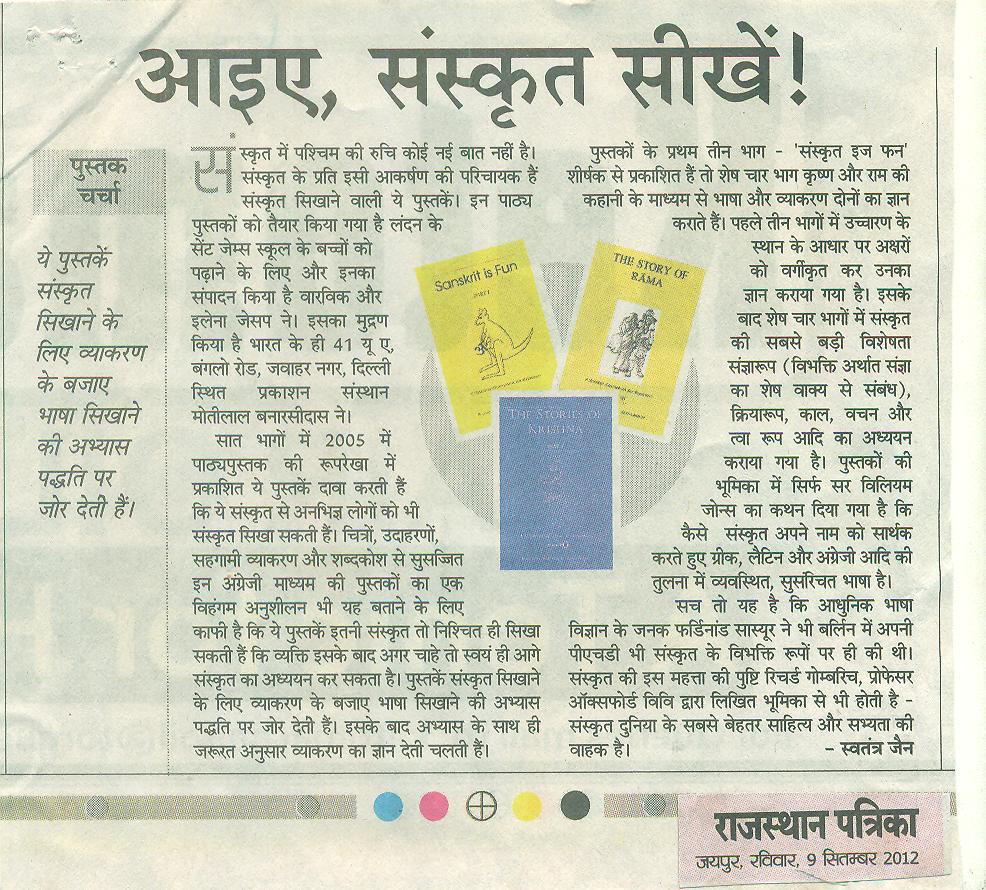 For nearly 35-40 years the following publications have been part of a chain of schools, St. James Independent Schools in UK as well as Europe, North & Latin America, South Africa, Australia, New Zealand so on and so forth. Unfortunately, Sanskrit has lost roots in its birth-place & is no longer part of school curriculum in India where it originated. Rather, Sanskrit is treated like a foreign language being grouped with other foreign languages like German, French etc. Therefore, it is our moral & social responsibility to work towards the cause of "SANSKRIT RENAISSANCE".


Among enclosed articles one of it is from “Speaking Tree” which will give you a comprehensive idea behind publishing the set. Your kind help in propagating, promoting & highlighting this project thru countrywide media support will go a long way in the larger interest of our society.


Since Sanskrit is the heart and soul of India, it is not only the mother of all Indian languages, but the source of all Indo-European languages.  Moreover, Sanskrit does not belong to any particular race, sect or religion. Such was the strong thematic expression of our Hon’ble Prime Minister, Dr Manmohan Singh during his deliberation at the 15th World Sanskrit Conference held at Vigyan Bhavan, New Delhi in January 2012.  I strongly feel that without Sanskrit, being the core origin of all languages, it is virtually impossible to sustain the cultural and spiritual values of our homeland for which India is held in high esteem.


In his Foreword, Prof (Dr) Satya Vrat Shastri writes, "The books could also be useful for those involved in performing arts like dance & music, or for students of Yoga & Ayurveda, subjects which have many Sanskrit references."

Posted by Desh Raj Sirswal at 7:54 AM Links to this post